I have decided to take one more week off of running and start running next week. I decided I wanted to have something to train for and started looking innocently for a 5 or 10k to run at the end of September. As I was looking at the list of races I found a race on my birthday that I would LOVE to run. Problem is it’s a half marathon…..can I be ready to run a half in a month, off an injury??? I guess we will see, runners world just published an article about a last minute marathon that also listed a last minute half training plan. I would love to do it but also want my knee to heal. I guess I will have to wait and see how the training goes.

Link to the race

For the last 5 weeks my right knee just hasn’t felt normal, it feels week during normal activities and I got a stabbing pain when I would run. I was convinced I would heal with just a bit of time off, so I took a week off and then competed in a the Loveland Lake triathlon. The run is only a 5k so it didn’t hurt too bad. The next week I ran 13 miles on a treadmill, it hurt but I was determined to keep up with marathon training. The next week I ran 15 miles but it took me over 3 hours because of all of the stopping and walking. Finally last week I went to the doctor to talk about the pain that wouldn’t go away. My general practice doctor thinks it’s a torn meniscus and recommended that I see an Orthopedic surgeon. I was able to see an ortho the next day, the guy was an a** and he thinks it may be a deep knee bruise with a *slight* tear in the meniscus. I have been instructed to not do any “loading” activities (aka running) for 4 to 6 weeks and then I can only slowly start back into running IF I have no pain. If I do have pain after 6 weeks of rest then it’s surgery time.

I am devastated, so much time off of training, so many planned races missed….it sucks, and honestly I am pretty depressed about it. I can still swim and bike (as long as it doesn’t hurt) but I love to run, I am a runner who just also does triathlons. I am tempted to sit around for this time getting fat and feeling sorry for myself, that would be easier to do, but I would rather do something productive during this forced downtime. So my plan is to work on my swim and bike fitness as much as I can and try to get closer to “training weight” so come spring I can get down to “race weight”easily. So in an effort to use this time productively here are my goals:

This race report is SUPER belated since it was in JUNE!! But I want to post it anyway so I have it for future reference. This was my first ever triathlon, I had the best time, I loved it, I am hooked. I want to point out that the goals for this year is not to be competitive. This year is mostly to figure stuff out, like what gear we need, how to transition effectively, how to fuel on long training days, etc. We haven’t done any speed work most of our training has been dedicated to just being able to go the distance. Next year I hope to be more of a intermediate athlete and incorporate speed work into my training and get faster!

This was fine on the way in since it was all downhill and it was a nice little warm up before the race.

This race is funny because you can’t park near the race start. According to the race website:
There is no parking at the Rock Cliff Recreation area. The park simply does not have adequate parking for the large number of athletes and spectators participating in this event. You will need to proceed to the Town of Francis and park in the two lots that we have designated. Athletes will need to park and ride their bikes down into the Rock Cliff Recreation area. It will be important to pack your wetsuit, and gear into a backpack that you can take down with you.

This was fine on the way in since it was all downhill and it was a nice little warm up before the race. Both T1 and T2 were in the same place, that was nice for a first timer! 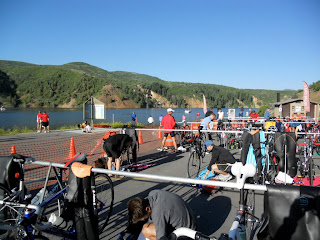 Swim: This was the worst part of the race for me, we started 30 minutes late because they had to clear a lot of debris from the course. Apparently there had been a lot of rain so there were a lot logs in the reservoir. The water was also REALLY cold. I am not sure if it was because of the temperature or because I went out way to fast but half way to the first buoy I just couldn’t get enough air, I felt like my wetsuit was choking me. My heart rate was racing and I was starting to panic. I seriously considered swimming to a kayak and giving up less than 5 minutes into the race. I slowed WAY down rounded the first buoy and felt like I could keep going, after rounding the second buoy I felt way more comfortable and could finally pick of the pace a bit. Needless to say I put up a pretty sad swim time but I am happy that I pushed through it and kept going! 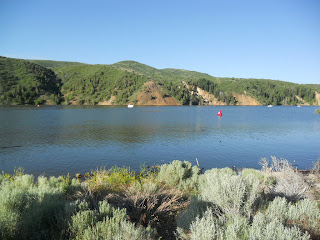 Bike: My favorite part of the race, it was beautiful, I remembered to push myself but I still came off the bike with plenty of strength to run. I think my average MPH was around 17, I was happy with that since I just took up cycling 2 months ago.

Run: felt ok, but was VERY hot, again, would like to be faster! 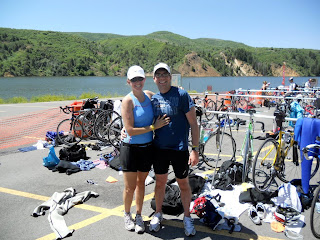 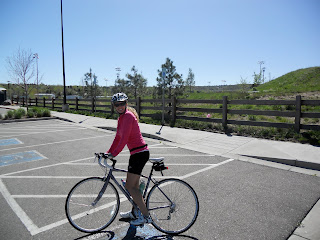 Workout: 1 mile(ish) open water swim ~ Hoping to get a 3 mile run in tonight

This morning’s swim was great, I love swimming in open water as the sun is coming up (although that makes it hard to see some of the buoys). The people at the lake recently changed the course due to the water level becoming lower and lower. The guy manning the sign-in told me that he thought the course was now between 750 and 800 meters. I thought that was perfect so I could practice my sprint distance and track my time. My first lap was 19 something and my second was exactly 20 min. I REALLY hope that he was wrong about the length or my swimming has gotten really slow. I can normally swim a 750 in the low 16s (not that speedy but I am hoping to lower that to 15 min by the end of the summer). It would sure be nice to have the new garmin that can be worn in the water so I could track how long it really is! 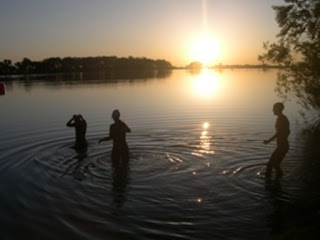 If I get out of work at a decent hours I am hoping to run 3 miles tonight.

We are leaving for our first triathlon tomorrow. I am nervous and excited. I am hoping I don’t come in last! Training has been sporadic lately with injuries, races and work getting in the way. Our next race is in late July so I hope to be much more prepared. We are traveling to Park City Utah for this race. At first it seemed like a great idea when we signed up for it, but after checking the water temperature last night I am a bit freaked out. The water is 15 to 20 degrees colder that I have trained in YIKES! Becoming a “tri-athlete” has been expensive, tiring and taken a lot of sacrifices, so I hope it’s worth it! I hope to next year complete the Boulder Half Ironman, it will be the biggest, hardest, best thing I will have ever done!