I have been a bad blogger (I don’t know how many times I can say this before I just have a BAD blog). But I am trying to be better….
The build up to RAGE was stressful I will admit. Work has been crazy, this time of year is always busy but add that we are opening a new exhibit and it pure insanity. So taking two days off to drive to Vegas and race was a challenge. So when I saw that the weather was forecasted to be in the high nineties I went into full stress ball panic mode. I seriously thought about skipping the race (then I could have joined my club for a long training weekend in Moab) or dropping to the Olympic race to avoid meltdown. In hindsight the weekend could have been a lot more fun if I would have relaxed a bit and rolled with the punches, but that the story of my life. But here is how the long weekend went:
Wednesday: Get home from work at 6pm and try to start packing, find Triathlon pack list on Google documents and laugh when I see it hasn’t been opened since September. Who’s idea was it to start the season with a half ironman? Mine?!?! Oh yeah…well I am an idiot. Finish packing late in the night and assume I have forgotten many important things, go to bed feeling very unprepared for a out of town race.
Thursday: Pack everything into out tiny car (it gets great gas mileage) 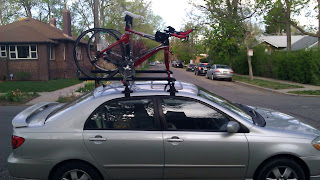 throw our dogs in the back and head to my parent’s house. Drop the dogs off and hit the road on time (YAY) then realize we forgot a bag at home and have to back track (boo, but hey it could have been way worse). The drive was about 13 hours if you don’t count the detour or the hundreds of bathroom stops that we had to make. 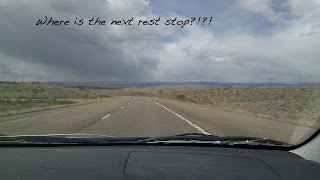 Since we were trying to hydrate for a very hot race we were drinking more water than we would normally on a road trip. We listened to audio books and tried to relax on the way, overall it was fairly enjoyable for being trapped in a car for so long. We pulled into our hotel around 8 pm thanks to gaining an hour from the time change. The hotel was nice enough but it was weird rolling my bike into a hotel! 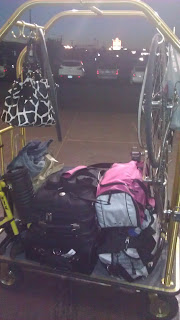 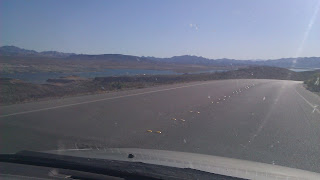 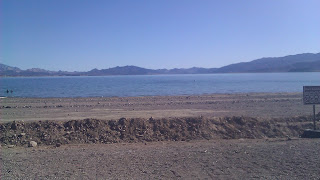 Friday: We were able to sleep in and wake up with no  alarm (bliss) before packing up and heading out to Lake Mead. Since I hadn’t been in my wetsuit in seven months or done any open water swimming in just as long I was ready to get some practice in. Thanks to liberal use of tri-slide I was able to get my wetsuit on comfortably and jump the water. It was very easy to get in the water and very comfortable to swim. I guess that’s the one bonus from the warmer than normal weather. The down side of that was that RAGE was supposed to be an opportunity to practice swimming in COLD water like CDA is likely to be. After sighting to some “no wake” buoys I was feeling like the swim would be the easiest part of the day. We then hoped on our bikes and did 30 minutes of easy riding.
We figured out that transition would be long and difficult, it was up the boat ramp and that starting on the bike would be a challenge too. Good thing to note and make sure your bike was already in an easy gear. 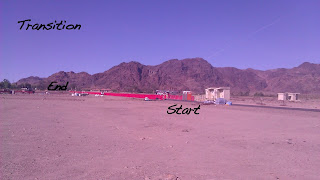 We threw our bikes on the car and headed out for an easy 20 minute run. The run headed out on a dirt (sand) trail and headed up the hill pretty quickly, I realized that footing may be difficult especially on the way back on fatigued legs. But mostly I noted that at 10 am I was already very hot and it was just going to get hotter. 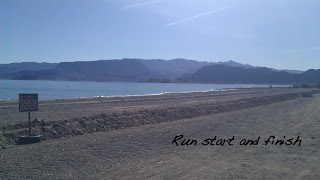 After running I was excited to be done with the recon work and do some touristy stuff. Since we were at Lake Mead we decided to drive over Hoover Damn, I would have liked to get out and see more but we couldn’t park the car in the garage with the bikes on top.

We did get a chance to walk out on the Pat Tillman Memorial bridge and get a great view of the damn that way. 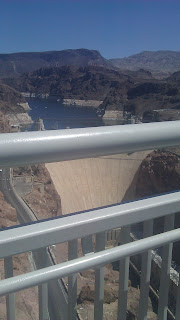 We then headed back into town and grabbed lunch on the way. We dropped the bikes in our hotel room and took a quick nap before heading out to packet pick up.

Packet pick up was surprisingly small but made up for it by being quick. There was one small room where you picked up your numbers, chip and goody bag and a few tents outside trying to sell stuff. After we had our packets we stopped at Red Lobster for a carb-loaded dinner  before heading back to the hotel where luckily we got a good night’s sleep.