This was was by FAR my favorite part of the day. It was a party from mile 0 all the way through mile 26. You can read about the swim here , the bike here and the prep here
I had a great time, honestly this is probably because I didn’t feel the need to push myself. I chatted with Cory, other athletes and volunteers the entire way. I was really worried that I would get off the bike and feel terrible starting a marathon in the late afternoon but I was SO excited to be off the bike with seven and a half hours to complete the marathon. At this point I knew I would make it and it actually felt really good to be running! 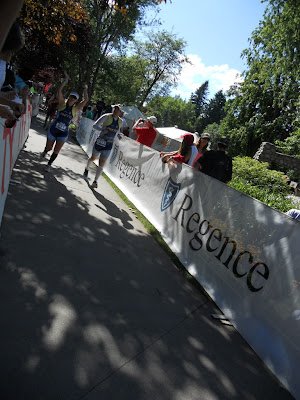 The run was two out and backs so we got to see all our friends a bunch of times and we knew what we were in for. I liked that there were no surprises. 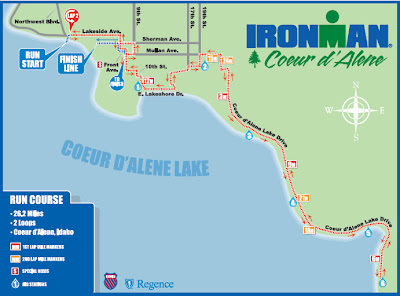 There was a long steep hill right before the first turn around, I will admit that I walked most of it both times. As we made our way back into town I made sure to thank every volunteer and high five the local college kids that were out partying and supporting everyone. The locals are so nice and set up their own aid stations. 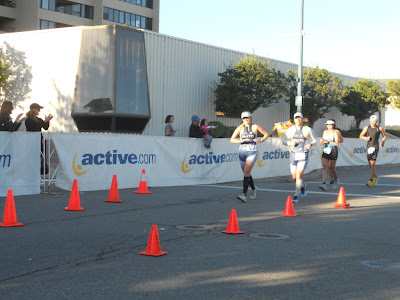 The half way turnaround is back in town where I got to see my family again, so nice to have them out there!  The second lap was more of the same, I felt tired but good. I was confident and having a good time. The only uncomfortable thing was that I got the chills but when I put on my long sleeve shirt I got too hot. But since a little temperature unbalance was the worst of it so I am not going to complain. It was a very long marathon (5:50: something) but the miles ticked by quickly to me, and soon I couldn’t believe it was the last mile. We ran into town, rounded the corned and just had a long down hill straight away to the finish. I could hear Mike Reilly calling out peoples names and announcing them as Ironmen. At this point I felt like I could fly, it’s the most incredible feeling in the world. 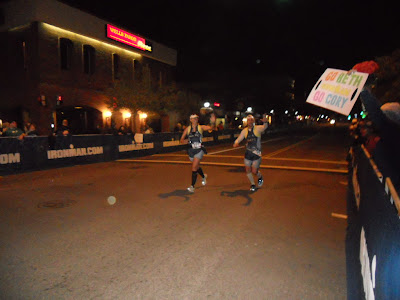 I was busy looking for my family and soon I spotted them in the crowd. I love this picture because you can see my mom and the sign she made us. She was SO excited to see us finish, moms are the best!

I was so excited to be done that I didn’t hear Mike Riley announce our names, I am bummed about that but I still enjoyed every second.

We were headed down the shoot, given blankets, medals, finishers hats and shirts. Part of me couldn’t believe that I made it and was officially an ironman.
Aftermath to come later.