This morning Cory and I got up bright and early to head down to Greenland Open Space for our first 25k.

We got to the race easily, with plenty of time to wait in line for the port-a-potties and watch the 50k start. One of the coolest things about this race was being out on trail with people racing an ultra. I also liked that this was a no frills race, we picked up our packets that  comprised of a number, chip and a tech-t, don’t need much else. 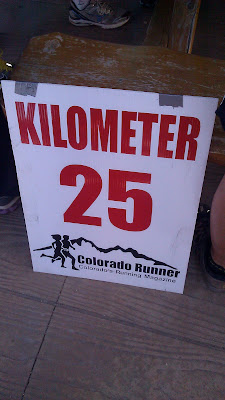 I left my camera at home so I don’t have many pictures from the day(whoops) but I did catch  few before the start on my phone. 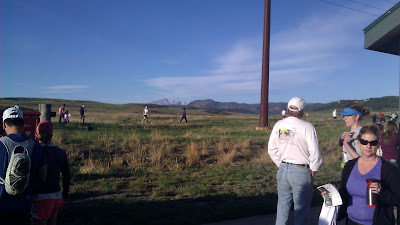 The race started on time and was small, all things I like. We knew that there wouldn’t be a lot of support on the course so we both carried our own water. There was an aid station at mile 3.5 and 7.7 of each loop. The volunteers were super nice and took great care of us. This race is made up of a 7.5ish  mile loop with a little added to the beginning and the end. So the 50k racers had 4 loops, we had 2 and there was an 8 mile race that ran the loop once. I realized that I liked running the loop twice but would have gone crazy having to run it four times (two loops good, four loops bad). It was fun to be out on the trail getting passed by the wicked fast 50kers and a few 8 milers bringing it in and cheering on the 50kers making it happen out there.

The race went fairly well, I had some pains in my legs and feet but that shouldn’t be surprising at the end of a high volume week. It was also hotter than I expected, but it was nothing compared to RAGE. I finished in just under 3 hours and added a few extra miles to round out our day. I enjoyed the race and would do the 25k again but I don’t think I would want to do the 50k.

After the race we went to packet pickup for Boco Loco, grabbed lunch, some ice for ice baths and my first mocha coconut frappuccino of the year, SOOOO good! 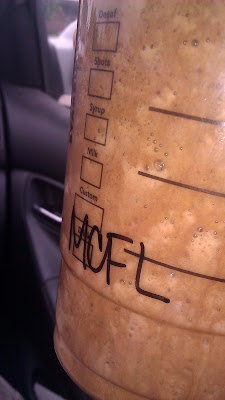 Now it’s time to recover as much as possible for tomorrows 102 mile ride. I did squeeze some Mexican food in today but no margs for me today, maybe tomorrow!