It was not the best weather for a race, but it reminded me of running back home in Oregon. It was cold in the low 40’s and raining hard. We got up at 5:30 am so we would have plenty of time to drink coffee (most important), eat and gather our things. 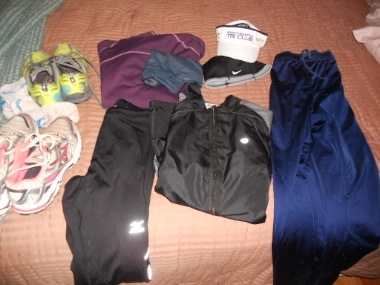 So weird to race in cold weather clothing after being hot for so long! This was a very small race so we showed up 30 minutes before the race start, grabbed our numbers, shirts and chips. We warmed up quickly and lined up. I knew I could have used a better warm up but my legs felt heavy and lungs full of crap so I wasn’t really feeling it. We lined up heard some updates and took off. I tried to pay attention to where the other women were ahead of me but also run my own race. The course was nice mostly along a fine gravel trail with rolling hills. The rain lightened up to a drizzle for the race which was really nice. It was really nice to see familiar friendly faces racing and volunteering around the course. I love that we are really getting invested in the running/triathlon community, it makes it that much more fun.

I didn’t feel very fast while running and was focused on controlling my breath so I didn’t have an asthma attack. I did pretty well and finished feeling crappy. Yup I hate 5k’s they hurt and suck. Don’t let anyone tell you “it’s just a 5k” they are HARD!

Cory was at the finish cheering me on as he had finished a few minutes before. I asked how he did and he came in 4th overall, I was so happy and proud!

We milled around talked to fellow athletes, Randi from RMTC was there (she is doing Ironman CDA too). We headed to the awards ceremony with hopes that Cory would win one of the coveted buffalo trophies, he didn’t think he would get one as only the overall winners and first place age groupers get one. He was already making plans on how he could earn one next year when his name was called as the winner for males 30-39 I was SO excited that we would be taking home a trophy and that Cory had won his age group. I was talking to Randi (who took second overall, GO Randi!) about how great it was that Cory won that I almost missed that they had called MY name….wait, what? I won for women 30-39??? REALLY?!?! I walked up front to get my trophy, and Charley jumped in to say that Cory and I were married so we would be taking home a matching set. 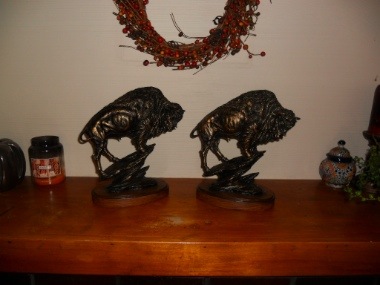 There was a collective ahhhhhhh from the crowd, and we had our picture taken together. I have to admit that winning with Cory was pretty sweet, we both won our age groups and took 4th overall for our genders. Overall, a great way to start the weekend. The rest of the day will be spent doing errands and watching live feed from Kona, we were excited to catch the age group start and the pros go into T1. 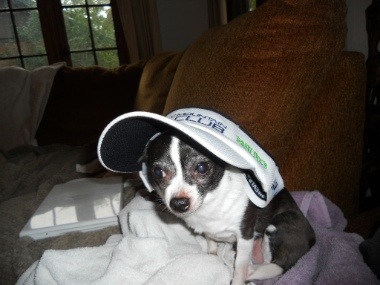 Daisy is cheering for all the Colorado athletes out there today!