Pacific Crest was the best supported race I have ever participated in. The volunteers were great and the course was the most beautiful I have ever seen. I had the best time, I would do it again this weekend if I could. Not everything went perfect but that’s to be expected, now I can focus on getting faster. 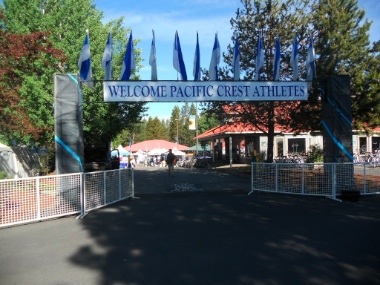 Sunriver really welcomes Pac Crest athletes. On Friday Cory and I headed down to athletes village to pick up our race packets. 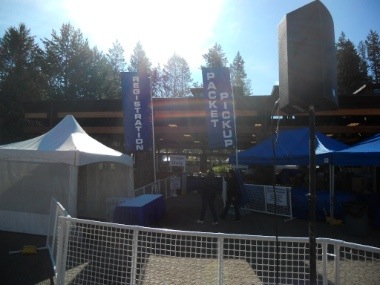 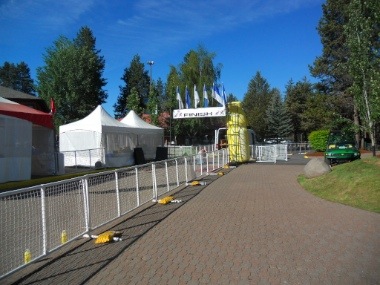 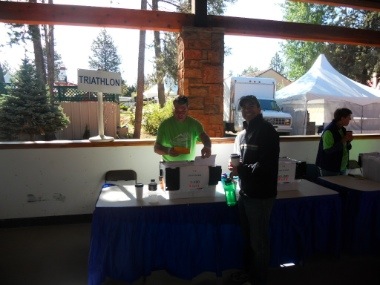 Before heading up to T1 to drop off our bikes and swim in Wickiup reservoir. The water was a bit chilly but not to cold. 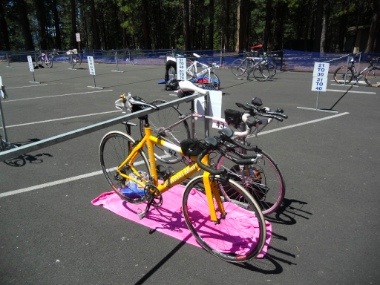 This race required a lot of prep because the bike is a point to point course so there are two transition zones. Also to cut down on traffic you have to take your bike to T1 the day before. 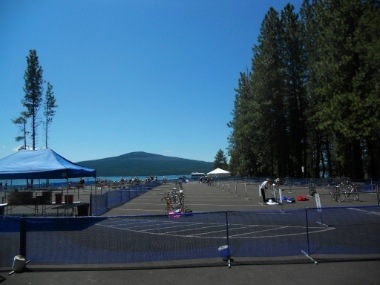 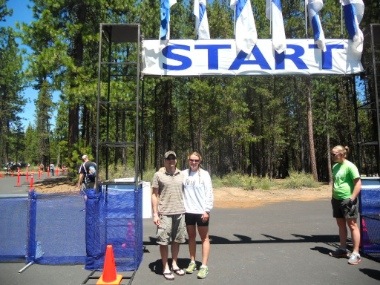 We then headed down to T2 to claim our transition spot. We waited until Saturday morning to set up the rest of our stuff. 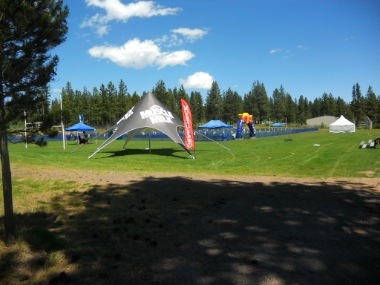 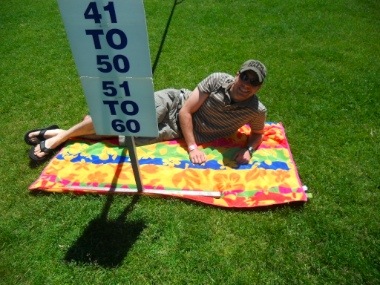 With all the set up done we headed back to my parents house to pack the rest of our stuff in bags and eat a delicious carb heavy dinner compliments of my mom.

Saturday morning wake up call was fairly late compared to other races but we were up at 5 am drinking coffee, eating steel cut oats and hydrating. I packed a cliff bar to eat closer to start time. I ended up not eating it and wished that I had.

Mom and dad drove us to T2 so we could set out our running shoes, race belts, etc. before jumping on a nice tour bus to head up to Wickiup. About 25 minutes into the ride another participant came to the front of the bus to let the driver know that we were going the wrong way! I am so glad someone was paying attention, we finally got the driver headed the correct direction but a 40 minute bus ride took over an hour. Thank god there was a bathroom on the bus! We got to T1 later than I would have liked but I still had plenty of time to finish setting up my bike getting my wetsuit on and going for a very short warm up swim.

My wave started 1 minute after the elite athletes. I was grouped with all men and women 30-35, I was a little intimidated to start with the men so immediately after the elite athletes started I moved to the back inside of my group. They were serious about our 9:01 start time and I barely had time to get my face wet to make sure my goggles were still sealed before the horn sounded and we were off. I made sure to start off slow and steady, I am so glad that I did because I didn’t have any breathing problems and felt great. It was a little hard to spot for the first two sections because we were looking into the sun but after the second turn it was easier. I was constantly surrounded by lots of people and it was sometimes hard to keep a smooth rhythm. I never drafted off anyone, I think that is something I want to work on. I came out of the water at 46:34, slower than I would have liked and HUNGRY, I really should have eaten again before the race started. T1 was also slow, you have to bag up all your stuff so they can transport it back to Sunriver for you and I also took the time to put sunscreen on before leaving. T1 time was 3:44. 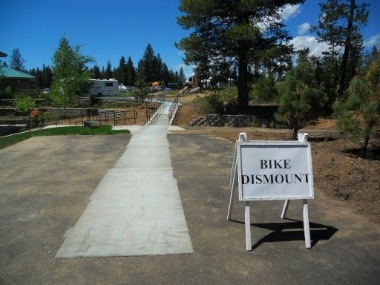 The bike portion is very difficult but beautiful. I would like to say that I enjoyed the scenery but I was in fairly intense pain from mile 4 to mile 58. My left knee had stabbing pain in it was well as a burning sensation in my IT band. I have never had pain like that on the bike, I have no idea why it happened, I thought about quitting many times and ended riding way slower than I know I could have. We also hit a huge head wind on the last 15 miles. I could barley walk my bike into transition my knee was hurting so bad. Bike time was 4:04:46, I had almost decided that I was going to quit at T2 and just move on knowing it wasn’t my day. I racked my bike and slowly put on my running shoes and downed 4 advil. At this point I decided I would at least get to my parents who were waiting for me at about mile 2.5 of the run, otherwise I don’t know how I would have let them know to come get me. T2 was 5:27 (yikes, you can tell I wasn’t thinking abut racing at this point).

I took off on the run and it hurt and my mood was super low. But with every step I took it hurt a little less, I don’t know if it was the advil or just different motion but by mile 1 I didn’t have any more pain and was feeling great. By the time I got to my parents at mile 2.5 I was sure that I could finish. I think this half marathon was my best ever, it may be the slowest one I have ever ran but I had the best time. I walked at every aid station and took fluids but ran the rest of the way. I talked to the other competitors and thanked every volunteer, in my head I was having party and everyone was invited. Around mile 9 I started getting the chills, I definitely wasn’t cold I think my body was just having a hard time regulating it’s temperature. Run time was 2:30, yes it was slow but I am happy with that time.

We saw my parents at mile 6 and then again at mile 13. When I turned the corner to run down the finish shoot I was emotional and overcome that I was actually finishing. I was proud and happy and floating on a runners high. Over all time was 7:30:33.

Thoughts after completing my first half ironman are that I loved it and can’t wait to do it again in September. I am going to spend more time in the saddle and work on speed, my goal is to finish in less than 7 hours next time.

Christmas Cactus Day 4: Our day in Sedona was a li

Happy Winter Solstice!! ❄️ What are you up to

Christmas in Santa Fe 🤩 we lived in New Mexico

Christmas with these coconuts is the best 🌵#chr

Loving our Christmas #booknook 🎅 what are your

Time to deck the halls!!! #happychristmas

Heading into Thanksgiving break so grateful and re

Happy Halloween!!! Be safe and have fun 👻

A visit to a ghost town during spooky season seeme

Instagram requires authorization to view a user profile. Use authorized account in widget settings
← We did it! ← Resolution six month check in