On Sunday Cory and I raced our only sprint triathlon of the year. I really like this distance as I don’t have time to get bored. The one issue is that I try to go “fast”and end up having an asthma attack. I really do need to work with my doctor on that. But on to the race.

We woke up at 4am drank some coffee, ate oatmeal and hit the road for Longmont Colorado where the race was being held. It was a beautiful morning, I wasn’t really in the mood to race after being up late working the night before but as soon as we got to Union reservoir, and saw the sun rise I was more into it. 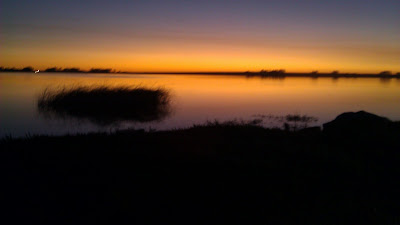 I have to admit it was a bit annoying that it takes almost as much preparation for a sprint triathlon as it does for longer races. 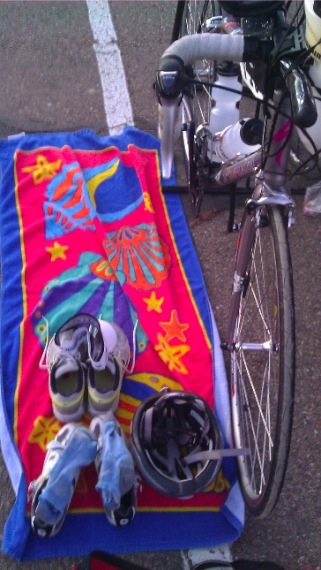 After setting up and squeezing into my wetsuit we headed down to the water to warm up a bit. The water was cold but not too bad and soon I felt comfortable. We were called up to the beach for the pre race meeting, at first I thought they were saying that the start would be a beach (run in) start and I got really nervous. I have never done or practiced a beach start and they terrify me for some reason. Lucky for me it was an in water start. I was in wave 4 so I had some time to say hi to my parents who came to cheer us on before wishing Cory lucky and seeing him off in wave 2.

This was the best swim of the season, we didn’t swim into the sun and my goggles didn’t fog so I spotted well and didn’t swim off course (yay for progress). I could feel that my asthma was acting up during the swim so I pushed as hard as I could without having a full on attack. Overall I am happy with my swim.

I exited the water waived at my parents and kept moving into transition. T1 was normal for me, I still have cycling shoes not tri shoes so that takes me longer than I would like.

I am very happy with my bike. As soon as I got on my bike I couldn’t catch my breath but I can push pretty hard on my bike without having an attack so knowing this was a print I tried to keep my heart rate high. The course was three loops, I didn’t like how many corners we had but it was rolly and flat and I knew what to expect so overall I really like loops (good thing since CDA has loops). I had a great time on the bike, thanked volunteers, and ran into transition feeling good.

As soon as I ran out of T2 I knew I was in trouble, I couldn’t breath and had to slow way down, but I refused to walk. I saw cory heading into the finish (it was an out and back course). I told him I needed my inhaler at the finish line and kept going. It was hard to watch so many people pass me on the run after feeling so good on the bike, at least 4 girls in my age group passed me on the run, I knew my legs could go faster but my lungs just wouldn’t let them. It is such a frusterating way to end a race. Cory was super nice adn ran my inhaler out to me and caught me at about mile 2 I took my inhaler but it didn’t help much. I headed into the finish not super excited about my time. But I was happy with my overall results.

If I had ran at a pace closer to what I know I can run I would have placed more liek 6th or 7th in my AG. Frusterating but it’s something I will work on and try to improve. Overall this was a nice way to end the season (can’t be too mad with a PR) and officialy move into off season.

Now it’s time to start planning next years races, heal, build strength and enjoy free time while I have it!

– Posted using BlogPress from my iPad

← Things that are making me happy this week… ← Planning Races