We finally had some cold weather come through Colorado yesterday. A storm left lots of snow in the high country and Denver with just a little less than an inch. Normally we get a lot more snow and cold days in October so we have had it easy this year so far. I had 16 miles to run so I bundled up and headed to one of my favorite paths that I knew wouldn’t to too snowy. 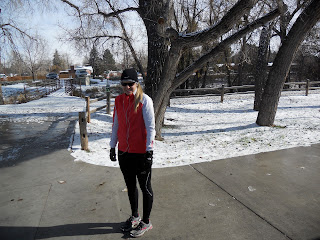 After running 16 miles yesterday Cory decided to join me on his bike instead of on foot. He carried my water for me and it was so nice not to have to carry a pack!
We started out in sub 20 degree weather, I was a little chilly but was fine until a very cold wind started blowing on the way back. Not pleasant but I would MUCH rather run in the cold than the heat! 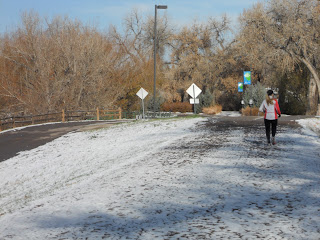 Overall the run was fine, my legs didn’t feel very spunky they pretty much felt the same at mile one as they did at mile fourteen.
Would you rather run in the heat or cold???

← Recovery ← This Week in Workouts 2