This week has been free form workouts while recovering from Pacific Crest. Including some strength training and yoga. Winston even got into the action with some Doga, he considers chewing a full body workout. I also had time to map out a training schedule for July that will focus on maintaining triathlon distance and build speed as well as getting in some miles for our ultra marathon in August including a 16 mile trail run tomorrow and a 50 mile bike ride on Monday. I had my heart set on completing ironman Coeur d’Alene in 2012, and registration is now open. It is SO tempting to just sign up for it and know that my ironman journey is underway. It’s just like me to jump the gun on something big like this. While in Sunriver last week Cory and I spent a lot of time talking about doing an ironman and which one we should do. After looking at the new Mont-Tremblant ironman and Ironman Canada I am wavering a bit. Also The unincorporated Vineman iron distance race has been thrown out as an option as well.

Does anyone have an experience with these races or advice?

Both Coeur d’Alene and Mont-Tremblant are open now and I don’t want to lose out on registering but Canada seems the most interesting but I think it may be really hard to get into. When faced with a big choice we made a list of pros and cons like a good analytical thinkers. 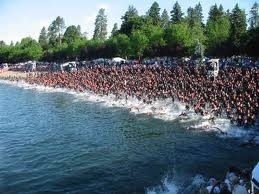 Any advice, what would you do?

← Resolution six month check in ← Back to Work