This race was over a week ago but between traveling and just not feeling that inspired to talk about the race I have been putting off writing my race report. When people ask me how the race went my automatic reaction is “good” and when I think about it on the whole it was but when I start breaking down the pieces it actually didn’t go so well. I learned a lot of things that I need to work on before taking on a full ironman early next season.

On race morning Cory and got up early to head out to Aurora reservoir where transition opened at 6am. There was a long line of cars with nice bikes lined up waiting to get in when we arrived at 5:45 am, by the time we got to transition we didn’t get the best rack position but this was not an A race for me so it wasn’t a huge deal. I went into this race not very nervous but also not with high expectations because I had not been training at all. I have been trying to rest and recover from my knee injury so with no running and little swimming and biking I was just looking to finish. After racking our bikes we suited up in our wetsuits, after not putting it on for a month I was happy when it zipped up. We then headed down to the swim start for a quick warm up. We then all gathered for last minute instructions and the national anthem. We also had a moment of silence for the anniversary of 9/11, it was weird and moving to be surrounded by silent athletes, it’s a rare occasion, I was happy that everyone took it seriously.

Swim:
The swim was laid out in a triangular single loop course, at first it looked like a perfect triangle but by the time my wave went off (last) the winds had moved everything around. I had the worst time sighting and swam way off course. At one point a kayaker even had to hunt my down to ask me to get back on course, I was embarrassed and frustrated that I was wasting so much time and effort swimming so erratically. I did a little better after turning around and heading back towards shore since I was not looking into the sun, but still not great. I was so happy to get out of the water and be done with that part. I have a lot of work to do to improve my swim!

T1:
When I got out of the water I felt drunk and dizzy, the water was shockingly choppy so it was hard to run up the slope to T1 (this probably added to my crappy swim time) I saw my parents who were cheering for me and said hi to the doodles before heading off into transition. I had a fairly normal transition except for the dizziness slowing me down. I decided to skip putting sun block on since it was over cast and I really wanted to get going, this was a BIG mistake! I burned and am still peeling (gross).

Bike: The first few miles of the bike were touchy since I was still dizzy from the swim but after a few minutes my head cleared up and I started taking in fuel and liquids. This was my first time racing with my aero sip and I love it, it really helps me stay hydrated while riding. While heading out there was a little headwind but not too bad and nothing was hurting so I was happy, I saw and cheered for Cory on a little out and back portion and that gave me a lift too. I then turned around and had the wind to my back I was having a great time except the road was really bumpy and my sits were starting to get sore. At about mile 30 we turned into the wind and it really started to pick up. I then started to not have a great time, the winds were strong, I was riding up hill and was working hard to ride with a speed in the single digits. The road on the way back is chip seal and I thought my teeth were going to rattle out of my head and my lady parts were screaming, more reason to buy a carbon frame! I was disappointed that I biked so slow and was so tired, I know this winter I am going to have to put in some real work on getting faster on the bike. I was happy that the never had the sever burning pain in my knee that I had during the bike for Pacific Crest so that was a bright spot. 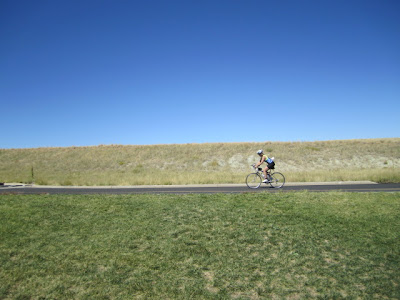 I was so so so happy riding into T2 knowing I didn’t have to run a half marathon. I did have to run about 400 yards to the finish and didn’t want to run barefoot so I threw on my shoes and then took off for the finish. After crossing the line there was a blow-up slip and slide that was the highlight of my day. It was really fun way to cool off and celebrate being done.

I was happy to be done but was soaked so I met my parents and then grabbed some clothes to change into. I then waited around for Cory to finish his race, he came in under 6 hours, he had a difficult run but I am so proud of him! I was sad that I didn’t finish the full tri but was happy that I sucked it up and at least finished the aqua bike since I had already paid for the race and hate have DNS or DNFs.

Overall it was a well run race with some difficult conditions, I learned I have a lot to work on and hope to heal completely soon so I can get to work.

← Hi from Georgia ← Off Season