For those that aren’t interested in all the detail and work that goes into an ironman here is the cliff notes from the week:
·         Tahoe is beautiful
·         The race is really ridiculously hard
·         I finished (the end, now you can skip the next four posts) 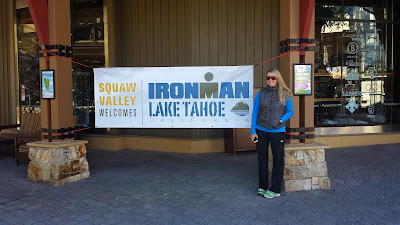 For anyone wanting a little bit more info on the race and venue feel free to read on:
We decided to drive out to Tahoe from Denver so we could bring our dogs and a bunch of other crap with us. 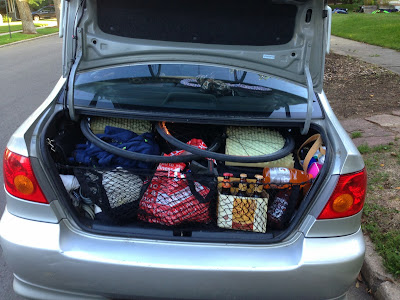 We also decided to camp in Park City Utah along the way. We haven’t had much of a chance to camp this summer so this seemed much more fun than staying in a generic hotel. It was beautiful and calming but we didn’t get all the fun of camping since we didn’t cook or even make a fire. Hopefully more camping will happen next summer. 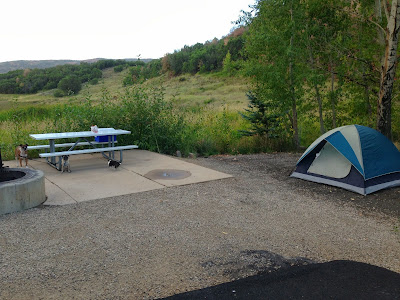 On Wednesday we rolled into Kings Beach, California. Kings Beach is a little town along the shore of Lake Tahoe where we had rented a house with my parents. We were so excited to arrive and see the gorgeous view of the lake we would get to have for the week. 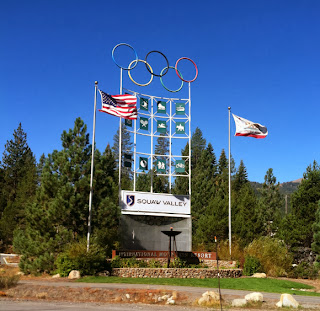 Thursday we all headed up to Squaw Valley where I did the athlete check in thing then we did a little touristy stuff and went up the tram, learned a bit about the Olympics that were held there and ate lunch. 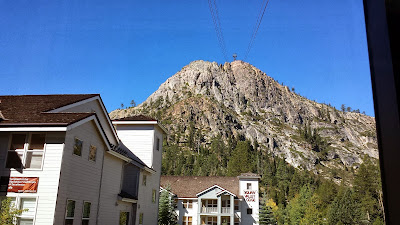 It was sunny and beautiful. Later that afternoon we took a quick swim in the lake at our house, the water felt great and I was feeling pretty confident about the swim part of the race.
On Friday Cory and I decided to go down to T1 at Kings beach at 7 am to see what conditions would be like on race morning. It was nice to see that we would most likely not be swimming into the sun. The water felt good again, fairly warm but the air and the sand were frigid. As we were leaving the beach I couldn’t feel my hands and my feet hurt really bad. This was the first taste of how challenging race morning might be. I was not concerned at all about the swim, it was much warmer than Coeur d’Alene last year, but I was nervous about getting on the bike. I decided for sure then that I would make a full change in T1 and wear as many layers as possible. Friday was spent mostly prepping my bags and figuring out last minute details since you have to drop off your bags on Saturday and I wanted to relax as much as possible on Saturday evening. 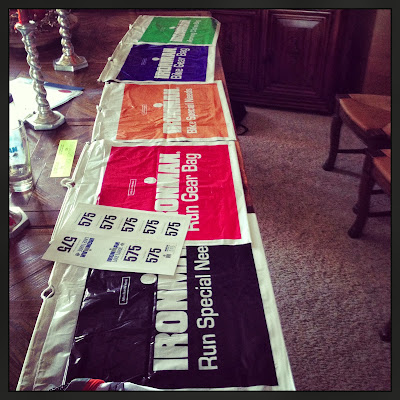 Later that night we headed back up to Squaw Valley for the Athlete dinner and meeting. 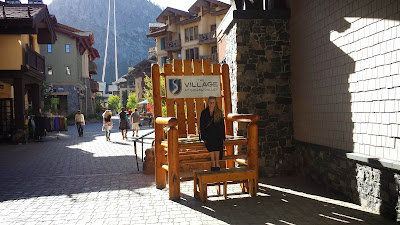 The food was blah or bad and it was freezing in the tent. My fault for not wearing warm enough clothes. The meeting was boring and kind of long. The only important information I heard was that the private neighborhood would be open on Saturday from 3-5 for athletes to drive if we were interested in seeing that part of the course. I think in the future I will eat my own dinner as both IM dinners I have been to have not been good. They have to feed so many people it’s not surprising but I would rather make my own choices (plus it’s expensive for guests).

Saturday it was raining, windy and snowing at higher elevation. 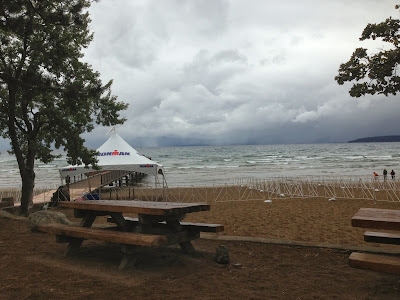 Crazy….I had a bike and run on my schedule from coach but I just couldn’t wrap my head around going out in the cold and wet. Plus all of my jackets, gloves and hats were packed away for race day. So a bagged the shakeout sessions and decided to just drop my stuff off instead. They were nice and allowed us to put bags over our stuff as well as over our bikes so things wouldn’t be soaked come morning. 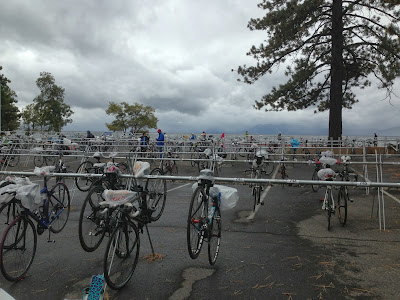 I was glad I did because people’s saddles that weren’t covered had ice on them race morning. After dropping my gear at the two different transitions areas (much more of a pain than having one transition area) I had a big lunch then headed out to drive a loop of the bike course.  Driving the course looked as I suspected very hilly in the back part of the loop with long stretched of steep 10%+ grades and technical steep down hills that scare me a bit on my TT bike (yes, I am a wuss). After driving the course I was nervous, I knew I was ready and fit enough to finish an Ironman but THIS ironman held many challenges. I told myself to show up, do my best and see where the cards fell. I had planned on having a light dinner but I wasn’t feeling hungry after our big lunch and probably nerves.

I tucked myself into bed early hoping for some good sleep with an alarm set for 4 am.
Coming next, Ironman Lake Tahoe – Race Morning and Swim